Every game on this site contains a portion of my writing style and personality.  Here are some recommended games and stories to provide a good sampling. 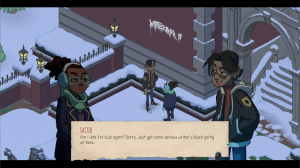 I was one of two writers of Wintermoor Tactics Club.  When I started, the game had no story except for some odd constraints: it had to be about three characters that we had art for, who were in a tabletop gaming club in a boarding school in 1981, and had to fight with snowballs for some reason.  Working with Kyla Furey, we strove to build an underdog mystery plot into a meaningful story about the dangers of tribalization and the importance of empathetic acts.

Together, we broke the story beats of a 12-hour RPG, came up with all the characters and quests, and wrote over 50,000 words of dialogue.  We worked with artists and combat designers, prepared all the writing for localization by writing extensive commentary, and helped cast the voice actors.

Wintermoor‘s writing has been universally praised by critics and players alike, resulting in the narrative-centric game garnering an 81 Metacritic and 92% positive Steam rating (at the time of writing). 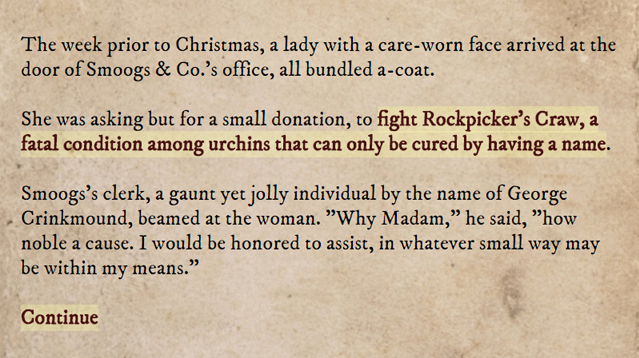 Want to see pure games writing, without the distraction of trivialities like gameplay or graphics?  Try the Twine text adventure I wrote for a holiday charity bundle.  Mixing Dickensian pomp with casual asides, the writing invites players to be complicit in an increasingly bizarre Christmas Carol homage.

The writing integrates many of the special techniques of interactive writing: conversation trees, story branches, user text input, and plenty of randomized elements.  I think it also shows how I’m able to invent a prose style to fit a specific tone and setting.

Astronaut: The Best is my current game project.  The writing is surreal comedy, with outsize characters and procedural shenanigans.

Interested in a pure writing sample?  Might I recommend “The Death of Comedy,” the first few chapters of a novel I wrote as an undergrad?

Most of my games are of a more comedic nature.  If you’re curious as to whether I can do more serious writing, might I recommend the short story “Coincidence” or my poetry?

I also have extensive experience with promotional writing, including scripting trailers for Wintermoor and Shove Pro, which won a Los Angeles Addy award.